It is expected that the Core will engage with several projects per annum.  Decision making and selection will be directed by Core Leadership, in consultation with selected members of the LEAP Executive Committee. To submit a project and/or obtain further information on the Modelling and Simulation Core please contact jmw@jhmi.edu.

Physiologically-based pharmacokinetic (PBPK) modelling and simulation of drug concentrations for long-acting antiretroviral drugs (LA-ARVs) can guide selection of dose, regimen, and formulation. A state-of-the-art Modelling and Simulation Core is a LEAP service offered to investigators working on preclinical and clinical development. The Core is directed by Marco Siccardi, PhD, and Andrew Owen, PhD, of the University of Liverpool. 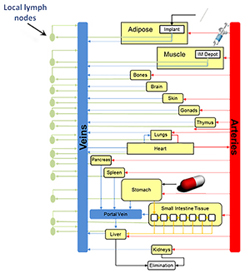 The pharmacokinetics of ARV’s results from a complex interplay between several processes in cells and tissues mediated by a large variety of transporters, enzymes, and other proteins. In vivo disposition can be considered through four phases: absorption, distribution in tissues and organs, metabolism, and excretion (also known as ADME). Mathematical equations have been developed to describe processes influencing human these processes and the resulting pharmacokinetics. These include formulation dissolution and drug release following administration, distribution throughout the body, renal clearance, and hepatic clearance. Each process is mathematically described in a concentration-dependent and time-dependent manner, through PBPK models based on current information about organ function in human populations. As such, anatomical, physiological and molecular processes, along with physicochemical properties of the drug and formulation are captured to define drug distribution, integrating patient-specific factors. Through the inclusion of additional modules to represent other routes of administration (and their mathematical descriptors), it is possible to simulate across other modalities that are being investigated by the scientific community, e.g., sub-cutaneous implants or systemic intracellular depots. Such simulations can be optimised for other delivery routes or strategies and used to generate dose and release rate combinations to inform target product profiles for LA ARV development. The prospective application of this information to preclinical formulation development and early clinical Phase I study results could greatly improve the efficiency of development, whereby the most promising drug candidates are identified and rapidly brought forward. 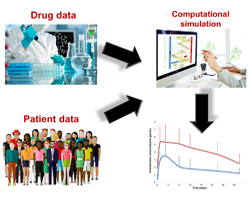 Investigators working on preclinical and clinical development of LA/ER ARV can access the” Modelling and Simulation Core” as Users, and therefore access predictive models to simulate the pharmacokinetics of LA ARV candidates, favouring the selection of the most promising leads. Users should engage through the supply of essential information related to their medicine (s) and the ARV’s of interest in order to allow the development of reliable models. Essential drug/formulation information includes physicochemical properties, transmembrane permeability, substrate specificity for drug metabolizing enzymes, and formulation properties such as dissolution profiles and composition.

The table below proposes minimum duration of plasma exposure as a guide to achieving long-acting delivery for HIV therapies.