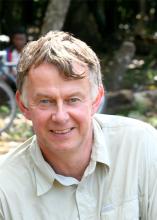 Peter leads teams investigating novel interventions against HIV-1, within the R&D group of Janssen’s Global Public Health organization. He is project leader for rilpivirine long acting, the injectable nanosuspension formulation being investigated for treatment and prophylaxis against HIV.

He joined Johnson & Johnson in 2000 and led first development work on oral rilpivirine (which became EDURANT) and bedaquiline (which became SIRTURO).  In late 2004, Peter joined Tibotec as Development Team leader for rilpivirine, successfully bringing the compound through Phase IIb, Phase III and registration in many countries. In 2007, he also took on team leadership for the long-acting injectable formulation, RPV LA.

Peter’s first role in the pharmaceutical industry was with Glaxo Group Research, working on cephalosporin antibiotics. He then spent 14 years with Roche, the first 7 in the UK and the rest in Switzerland, where he was Head of Clinical Pharmacokinetics.

Education included an M.A. in Zoology from Oxford University and a Ph.D. in Biochemistry from Manchester University.